Who We are
Home » Who We are » Chamber History 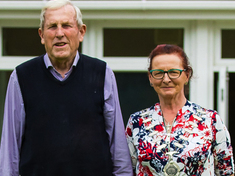 TULLAMORE should and will have a Chamber of Commerce.

This was the feeling and the decision of a meeting held in the Bridge House on Monday night, July 18th 1977 when a committee of ten people was appointed to prepare recommendations regarding a constitution for presentation to an inaugural meeting to be held within the next couple of months.

Thus recorded the Tribune of July 30 1977 reporting on the first formal step in what would lead to the establishment of Tullamore and District Chamber of Commerce later that year. The direct impetus for the meeting had come from the Hospital Action campaign which had been formed for the General Election of the same year to preserve the status of Tullamore Hospital then under threat.

The Tribune report continued: In the chair for Monday's meeting was prominent contractor, Mr John Flanagan ・ on whose initiative it was convened ・ and the attendance of about 30 included representatives of the local commercial and industrial interests and other leading members of the  community, together with Dail Deputies Mr T.W. Enright and Mr Ber Cowen and Tullamore Urban Council chairman Mr Pat English.”

Speakers were unanimous in urging the value of such an organisation with the County Development Officer, Mr Sean Ryan putting it most clearly ・ the need for a Chamber was self-evident, he said.

Mr John Flanagan too spoke of having been approached by different people, including members of the Junior Chamber, of which they had a very active Chapter in Tullamore. Junior Chamber President, Miss Geraldine Clarke, N.T., - the only lady present at the meeting ・ said that they would like the new Chamber to call on them for any support they might need.

Mr B. Cowen T.D. said there was tendency for Chambers of Commerce to be a bit parochial and he strongly recommended that the proposed organisation should take into consideration that Tullemore town was dependent to a certain extent on the surrounding areas – up to a radius of eight to ten mile

Matters moved more quickly than anticipated and the Tribune of August 13th 1977 reported that on the previous Tuesday, August 9th the inaugural meeting of the Tullamore and District Chamber of Commerce was held. An executive committee was installed for a trial period of one year with John Flanagan at the helm in the position of first President and Christy Maye as Vice-President.

The first Executive meeting of the newly formed Chamber was held one week later, on August 15, 1977, and the attendance decided on eight projects to be pursued by the body including a survey of the labour pool in the area, the development of services and public amenities, accessing funds from the then EEC and social and educational development.

In the 40 years that have elapsed since that date the Chamber has become a key influencer locally, regionally and nationally.

In an interview with the Tribune last August on the actual calendar anniversary of the Chamber's formation, the founding President John Flanagan said the body had been successful on a number fronts, particularly in promoting and developing the town and giving a voice to the concerns of the whole business community.

From day one, the Chamber lobbied local and central government, the IDA and other development bodies, the powers that be in tourism and all other decision makers on what was best for Tullamore from the perspective of the business community. It has made its voice heard on successive town, county and national development plans and lobbied on the need for infrastructure developments such as advance factories, the relief road, the by-pass, the proposed route connecting Tullamore to the new M6 motorway, the upgrading of the hospital and many other issues.

The Chamber has worked hand in glove with other local statutory and voluntary groups, the local authorities, the Gardai, Tullamore Show, various festival committees, Tidy Towns, the National Ploughing Association and Comhaltas Ceoltoiri Eireann during the staging of Fleadh Cheoil na hEireann here on three successive years. For many years it has co-operated with Tullamore Credit Union in the highly successful QUIDs shopping vouchers scheme.

It has also played a major role in the fields of education and training for members in a variety of fields including the latest changes to Irish and EU legislation and technological developments. For instance, just last Tuesday, it hosted a well attended information seminar on new PAYE and data protection legislation.

The suggestion made by the late Ber Cowen at the original public meeting held to explore the need for a Chamber was taken on board and the body's official title is Tullamore and District Chamber of Commerce. As such business, commercial and retail interests from the town's hinterland, in particular Clara and Kilbeggan, in neighbouring Westmeath, have and continue to be articulated by the body.

No official history of the Chamber exists but former Chamber President, Shaun Wrafter, has trawled through the local newspaper archives over the past four decades and put together an exhaustive account of some of the milestones of the Chamber's journey since 1977.

These include the publication of various brochures promoting the town including Make it Tullamore in 1985 and Tullamore Means More in 2004 to coincide with the European Foreign Ministers summit in town.

Shaun's archive records the Chamber was ahead of its time in proposing a Heritage Centre for the town in the early 1980s while in the late 1970s it championed a piped television service, on the suggestion of Junior Chamber.

In 1993, it was praised by the IDA for instigating a register of workers based locally with foreign language skills.

At the same time Chamber members gave an enthusiastic welcome to the then American Ambassador, Jean Kennedy-Smith when the body hosted an official reception for her in Tullamore.

Another major milestone in the development of the body was the opening of the Chamber's first full-time office in July 1st 1998 and its current headquarters in located upstairs in the Bridge Centre, courtesy of Christy Maye.

The Chamber's effectiveness has ebbed and flowed over its four decades existence depending on the strength of its membership. At present it is in rude good health with a record membership under the stewardship of President Anne Starling.

The commitment of the present executive and membership of the Chamber is mirrored in all those officers and members that have served over the past four decades.

At its annual business awards night on Friday last the Chamber honoured its Past Presidents with special presentations which were made by the Rose of Tralee, Offaly woman, Dr Jennifer Byrne.